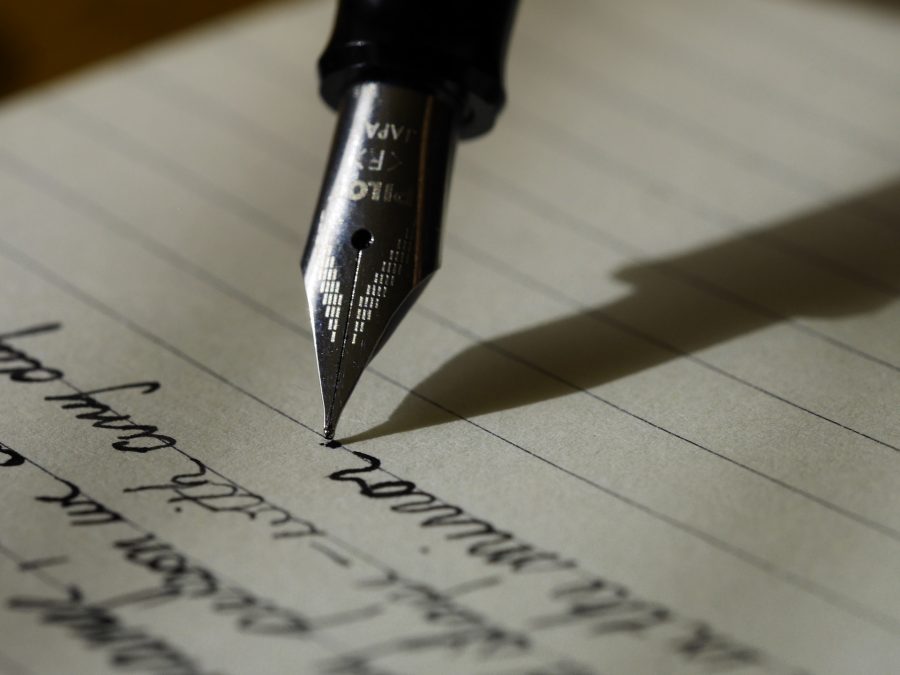 The Fight for Flight: The Birth of a Writer

I used to hate reading and writing. From an early age my mother forced me to read and write her book reports, and they usually needed to be done by the time she came home from work that day. I used to think that if I never read another book again, it would be too soon; however, life has a way of turning everything upside down. Moving to the Central Bucks School District was the beginning of a passionate love affair with the written word.

We walked for barely a minute down the long hallway before we slowed down and stopped at the first door on our right. Was this it? An average height man, with clean-cut brown hair, sort of balding on the top, stepped into the doorway and answered my unspoken question.

“Hello, Renee, my name is Mr. Price.” I smiled meekly and shook his hand. This Mr. Price seemed nice.

A firm grip on my shoulder brought me out of my thoughts. My gaze drifted from the back of my mother’s disappearing figure to the middle-aged man standing at my side. I felt like a child lost at an amusement park, or possibly even a sacrifice that had been thrown to a den full of lions—very hungry lions.

Mr. Price ushered me inside the classroom and led me to the table in the back. He seated himself in the typical student chair, allowing me the pleasure of sitting in the comfy teacher’s chair. Hands clasped, legs crossed, with his head cocked to the side, Mr. Price looked thoughtful. But then he leaned forward and began the interviewing process. The administration wanted to make sure that I was a good addition to their school.

He asked me about the little details: favourite colour (red, by the way), what I did for fun (dancing), my favourite subject (science, at least it was back then), what I wished to gain from my experience at Mill Creek Elementary (an education)? And then he asked his final question, such an innocent, well-meaning question that brought me a whole load of trouble: what did I want to be when I grew up?

What did I want to be? A fashion designer. I almost voiced my position of choice, but stopped myself. Numerous faculty members informed me before this day that Mr. Price was working on a novel. Without thinking, I said, “I want to be a writer.”

It was just a little, white lie; it wasn’t meant to do any harm, but I didn’t know what I walked into when I opened my mouth.

Mr. Price grinned. “Well then, Renee. After viewing your writing from your previous school, I think you’ll need some extra work.” I nodded, and he continued, “I will work with you as much as possible to get you closer to your goal, which means I may grade you a little harder than your peers. Is that okay?”

Of course it wasn’t okay. Why would it be okay? But I couldn’t take it back. He had seemed so happy. If I retracted my statement, I would look like a liar. But if I let him think that I wanted to write for the rest of my life, I would be in for a year of schooling I doubted I could live through. It wasn’t even a choice—I would rather struggle through the year and come out a better writer than tell him I had lied.

And suffer I did through one of the hardest years I have ever had to endure. More times than not, I scored about a C paper. He would tell me, “Renee, if you want me to grade you like the other students, this is about a B/B-. If you want me to grade the paper as we had discussed when we first met, this paper is about a C. I leave the decision up to you.” He gave me an out almost every single time, and eventually it became automatic for me to tell him, “Grade me as we had first discussed.”

He would always smile after I responded with that reply, as if I had pleased him on a level that I couldn’t understand.

Paper after paper, pitiful grade after an even more pitiful grade, I never gave up. I was determined. I would score at least a B by the time summer came. My sister and parents offered to help and every time, I refused them because the struggle was mine, my fight, my battle to win. I needed to prove to myself that I could improve. I needed to prove to Mr. Price that I would struggle on and come out on top at the end.

But somewhere in the middle, I noticed that writing had become an enjoyable hobby, as opposed to a dreaded task. Around the same time Mr. Price had assigned the class to write a memoir; we had to write about a defining moment in our lives that changed us in some way. There had only been one such moment in my life—I decided to write about my uncle who had died less than two years ago.

Before that assignment, I had never known how much power there could be in the written word. I struggled for weeks working on my essay, asking Mr. Price to edit my work every single time a draft was finished. It seemed as though every time I fixed the corrections on the previous draft, the next one was filled with more.

Little by little, Price molded me into a better writer—word choice issues, comma issues, spelling issues, just so many issues. I thought that I had become a better writer, but it seemed that with all the mistakes I still made, I hadn’t improved at all.

But I wouldn’t be brought down. I enjoyed my time behind my computer, typing away at the memories I most cherished. I laughed and cried throughout the process, and all the while, I was having fun. Even though the memoir caused me heartache, it thrilled me that I finally had the chance to express what I had kept to myself for so long.

With the final draft handed in, my parent’s thoughts and reactions proved to be the final test on my writing journey. I sat on the steps, and I listened to my mother and father read my memoir. My mom read the memoir aloud and part of the way through, I heard my mother’s voice tremble. Shortly after, sobs followed. And just a little bit after that, by the time they had neared the end of the piece, I heard my father crying as well.

As I sat on those steps, listening to my parents cry, I realized I found myself when I walked through the doors of Mill Creek Elementary. I just hadn’t known it yet.

My wings, small and malnourished and ill-used, were waiting for me to enter the classroom and start my writing journey. They stuck with me, growing in size and flourishing with beauty as I realized my passion and hunger for the written word. Wings, however, are only as useful as they are allowed to be.

Giving up control and satisfied that I fought to the bittersweet end and won, I spread my wings.

The day my parents read my memoir I learned what it meant to fly.